Reinhard saw there for the first time in his life many colorful budgies in a pet shop and bought a pair.

Reinhard was a trained joiner (carpenter) and able to build himself a nice cage for them and was up and ready for breeding.  A neighbor of his had a big garden where he kept and bred many budgies as a colony. After helping him out during holidays Reinhard was absolutely sure that breeding budgies will be his ultimate hobby.

Reinhard successfully practiced and enjoyed his job as a joiner in a small company where he had the opportunity to keep a couple of breeding-boxes for budgies and Zebra-finches at his workplace!

After meeting other breeders he joined a budgie club and enthusiastically went to the shows and became a judge at the age of 22.

In 1961 Reinhard & his wife Jutta moved to the South of Germany and have built a small house with a big bird-room in the basement and a nice outdoor aviary connected to the basement. Jutta managed the entire feeding and nursing of the budgies all the coming years until moving to South Africa.

When Reinhard was breeding the “German-Standard-Budgie” he saw a great future for breeding those wonderful birds.

After a few visits to Holland Reinhard was able to purchase a few “English-Standard” Show Budgies.

In 1967 four more friends and Reinhard visited the cage-bird-show at the Alexander Palace in London. That has been an eye-opener for Reinhard of how a budgie can look like.  After returning back to Germany Reinhard sold all his birds and got to know Alf Ormerod shortly after that, who had won the Best young bird at Alexander Palace.  And like that Reinhard started off from Ormerod birds and never looked back.

Reinhard then founded the AEW Club for English Show budgies in Germany.  The club was a great success and the fanciers only wanted English show budgies from there on. The birds were also judged on the show-bench just like in England.

In 1972 Reinhard won “Best in Show” at the National and many other successes.

In 1973 the Molkentin’s moved to the Black Forest Area (South West of Germany) and have built a big house with big bird rooms and outside flights.

1977 Reinhard won another Best in Show at the National.

In 1980 Reinhard had the great opportunity to purchase the Spangles from Rolf Christen, a Swiss National living in Australia.  This mutation has given him special pleasure till this day. 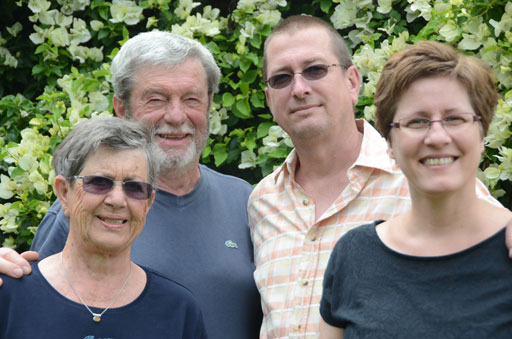 In 1984 Reinhard had the idea to host a Budgerigar World Show in Germany just as it had taken place in England in 1983.  Gerald Binks was very enthused and it’s a very successful show till this day.

About that time Reinhard’s son Holger got involved in the breeding of show budgies while completing his degree as a biologist.

In 1985 Christine has joined the Molkentin’s and not only fell in love with Holger. Growing up in town she was overwhelmed seeing all the birds and also the bull terriers they were breeding.

In 1987 Reinhard was invited to judge the National Show in Pretoria, South Africa.

The whole family loved the country and its climate and decided to immigrate in 1993, where the Molkentin’s have built a new home on a smallholding in Pretoria East, which is presently also part of a private Game Reserve with abundant wildlife.

But new beginnings are never easy.  As an exhibitor Reinhard was not accepted as a champion and had to start as an Intermediate for 2 years.

During the years the Molkentin’s also have bred very successfully African Greys and Macaws which unfortunately they had to give up again as it was quite labor intensive.

The climate conditions are very favorable for the breeding of our show budgies.  At the present we are breeding with 124 pairs, have 5 inside and 3 outside holding aviaries.

Since 1999 we have won 7 times the National Show among numerous other winners.

During Reinhard’s many years as a judge he had the pleasure of judging many National Shows all over the world.

In 2011 Christine has decided to join the hobby as a member on her own – M8, specializing in Rares and imported some Crests/Tufted budgies from England organized by our friends Tom and Andrew Luke.

Obviously Christine also breeds with normal colours to improve on the Rares.